Mobilink on Sunday went down throughout Pakistan which was initially an outage in the North zone only including Islamabad, Rawalpindi, Peshawar and the surrounding areas. Later the load on the other networks increased resulting in an outage and downtime throughout Pakistan. I don’t understand one thing of our people, why on earth do you use Mobilink on the first place if you have to literally abuse them. Go on, you have other options too. Sorry for using these words but, Jis thali mein khaya usi mein ….

You cannot even leave Mobilink and when a natural mishap happened, people started abusing them on their facebook page and on twitter, instead of co-operating with them. This was extremely annoying for me at least to see that since last so many years you people are using Mobilink and now for just an unfortunate mishap you all started swearing at them.

Mobilink is Pakistan’s largest cellular company with over 50% of the market share. This unfortunate incident occurred created a huge distance between the customers and Mobilink now, as people are quoting Mobilink is unreliable network now. But what I see is, Mobilink is still reliable as they have the biggest investment in the cellular industry of Pakistan and I’m sure, they can’t afford to lose it at any cost.

Good news is, Mobilink and PTA both worked hard during the Sunday to put back the network online and they have successfully made their network back online within a day. Yes, partially the network is back which includes mobile service and the Internet service (of link dot net) as well. This outage is Pakistan’s every worst telecom outage which rolled out the whole nation and the users got confused what to do. The businessmen were effect the most who also work on Sundays. The life of a youngsters were disturbed because according to a guy on Mobilink’s facebook page, he said that he has lost all his girlfriends today because of Mobilink. Though it is a shameful act, but he was proudly saying it again and again there.

Mobilink just confirmed on their facebook page that partial restoration is done.

“We confirm partial restoration of all services in the north region that were affected due to a fire incident at one of the our technical hubs in Islamabad on sunday evening causing suspension of #Mobilink services in Islamabad, Rawalpindi and some pockets outside the twin cities. There was no loss of human life and complete restoration is expected within a few hours. Thanks for your patience and kind support.”

Mobilink has announced on their website that all the services have been restored:

“All services including voice, sms and data connectivity that were affected due to a fire incident yesterday have now been restored and our customers should not be experiencing any difficulties. We sincerely regret any inconvenience caused to our valued customers. Any customer contiuning to experience difficulty may call our helpline 111 from their mobile or 111-300-300 from a landline.” 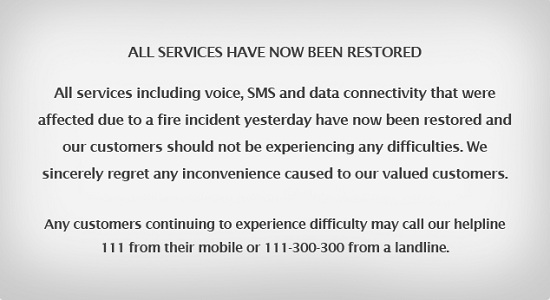