The above mentioned charges will be applicable from 9th April 2011. These charges apply for djuice and Telenor talkshawk customers. 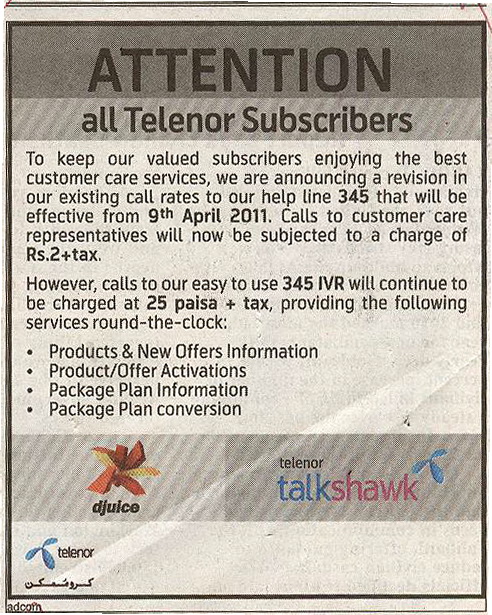 Not to forget that Mobilink is already charging Rs.2.42 for calls to helpline since November 2010. Call to helpline numbers used to be free couple of years back, but later were charged to stop all the prank callers who used to disturb CSRs and effect their internal ranking. The initial charges which started on the helplines were 50paisa+tax and later were increased to Rs.1+tax. So almost every year this rate is revised saying that it is increased so that the company can put in more CSRs to help the customers. Rather I think, the companies are not able to afford the CSRs anymore as all of them has started downsizing and started hiring on contract basis or some have outsourced. I hope the next year these charges don’t hike up to Rs.5+tax and becomes the only powerful source of the cellular companies to earn profit from helpline calls where no airtime charges apply and the money charged to the customer goes directly into the pocket of the company.