Ufone in collaboration with HTC conducted a bloggers meetup in Marriott Islamabad, on 15th April 2011 to launch HTC Incredible S smartphone mobile handset. Two handsets were given on the spot by Ufone via lucky draw. For the third handset they announced a competition right at the spot which Hamad Dar won after getting most likes on Ufone Android facebook page. 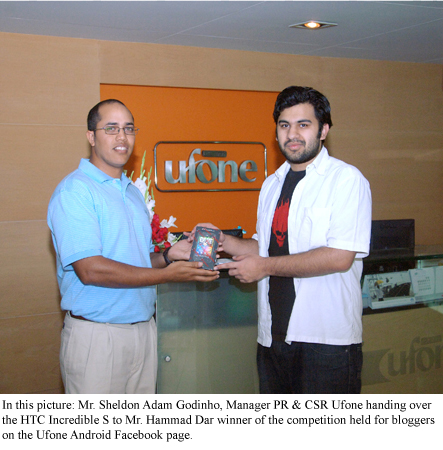 Ufone announced that the blogger present at the event has to put a status message on Ufone Android facebook page. Whoever get the most likes on his status will win the third handset. Hamad Dar (founder of KoolMuzone.com), Shoaib Khan (founder of Xnews.pk) and Talal Masood (founder of Pak-SMS.com) were competing but Talal left it in the early stages. Hamad Dar and Shoaib Khan were very close to each other through out the two weeks long competition and final result was announced in which Hamad Dar won the HTC Incredible S smartphone. Mr. Sheldon Adam Godinho, Manager PR & CSR Ufone awarded the HTC Incredible S handset to Hamad.